I read a lot thanks to my parents for instilling that trait in me. It was because of them that I can write well enough in English so that most reading will be able to understand. One of my all time favorite book was Aesop’s Fables. I must say that most of the values I practice in life pretty much came from Aesop’s Fables.

As a continuation to yesterday’s rambling, which I was giving much thought as I try to reason out the situation, a fable came to my mind. It is called The Fox & The Grapes. I believe that this is the fable where the English idiom “sour grapes” came from.

I believe strongly that most adults these days did not have the chance to read Aesop’s Fables. Even if they do read it, the unkind world must have drown the good moral values in them. The story is self-explanatory. 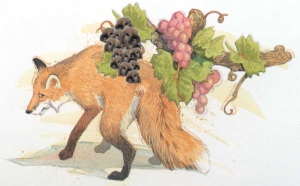 Original illustration source unknown but was taken from http://beribiru.net/?p=13. I added a bunch of bunny grapes!

The following is taken from Wikipedia.org with a little “twist” modification :

One hot summer’s day a Fox was strolling through an orchard till he came to a bunch of Bunny Grapes just ripening on a vine which had been trained over a lofty branch. “Just the thing to quench my thirst,” quoth he. Drawing back a few paces, he took a run and a jump, and just missed the bunch. Turning round again with a One, Two, Three, he jumped up, but with no greater success. Again and again he tried after the tempting morsel, but at last had to give it up, and walked away with his nose in the air, saying: “I am sure they are sour.”

It is easy to despise what you cannot get.