As the year 2011 draws to a close, I would like to just take a step back and share my observation of the “bunny situation” here in Malaysia. We all know that 2011 is the year of the rabbit. Due to that reason, there has been an influx of rabbit experts that has mushroomed right before the Chinese New Year. Seeing how disposable pet rabbits are, many has taken it as an opportunity to make some quick bucks (money not rabbit gender). We can even read in one of the local dailies that Malaysia has more than 50 breeds of rabbits but at the end of the day, I could only see one – mixed breed. I mean we do have pure breeds that comes with pedigrees but many do not even know what a pedigree is.

I am sure most of you have heard of the term “One Hit Wonder” before. One Hit Wonders often cause euphoria when they appear in the market out of a sudden with something catchy but as fast as they appeared, they usually disappear leaving behind a trail of havoc and huge mess! There are a few like that in the rabbit market and I believe many has fallen victim. Examples are those who issue fake pedigrees just to increase the prices of rabbits, using a different stud rabbit from the initial agreement, selling average rabbits for top dollar stocks and much, much more! It is a huge mess I tell ya!

These One Hit Wonders also became expert overnight claiming to know much just because they are good at using the bunny lingo (they actually do not even understand themselves). Suddenly we have experts started using terms like DQ and slip crown and the best part is, every rabbit has a slip crown according to them! Lucky for me, I can sniff a wannabe from miles away!

Then out of a sudden, everyone started looking for “Show Quality” rabbits. I just feel like as if, this whole bunny world is filled with parrots instead of real human who love rabbits. When asked about the definition of Show Quality, the answers came in all sorts. Show Quality according to them are “imports”, “they look fat and chubby”, “pedigree rabbit”, “they look like bulldog” (super parrot) and “they are very cute”.

Honestly, I have no patience to deal with One Hit Wonders and their cult followers because I found that many will not be in the hobby long enough to have an objective with all the “Show Quality” rabbits that they have acquired. Why would I want to waste my time and rabbit on someone who will not be in it for long term? I do not like to deal with potential abandonment cases.

As I was having dinner with my family, an image came to my mind and since my father is a good artist, I told him of the image I had in mind. After dinner, we spent 2 hours in his little art studio and we came out with the following painting. 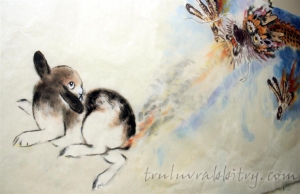 As a conclusion, I hope all these One Hit Wonders will now start playing with the Dragon and get flamed on the BUTT!