A friend staying nearby needed some Timothy Hay and told me to toss them into her house. After she assuring me that it was alright if the packaging might get damaged in the process of flying airborne, I agreed to play “target practice” with two mini bales of hay.

Two hours later, I pulled up at her front gate, got off my car and took two packets of hay from the trunk. As I walked nearer to the gate, I heard my car doors locked and thought nothing of it. I must have accidentally pressed the lock button while holding the packet of hay.

I then put one of the packets of hay on the ground and raised both my hands in preparation to toss the first packet into the house. As I toss the packet of hay into her house, together with it flew my car keys! 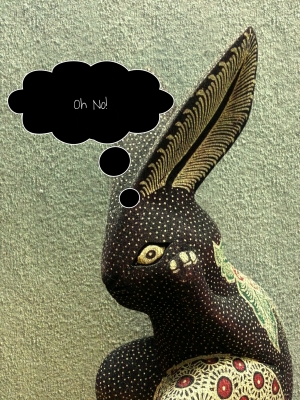 I touched my pocket to feel for my mobile phone and then remembered it was charging in the car! I thought at least if I am stranded, I could call someone to come rescue me. And perhaps I could use the umbrella to reach for my car keys. I reached for my car door and realized it was locked!

No phone, no umbrella and car keys in someone else’ house!

All I could do was to toss the other packets of hay in while my brain seek for ideas.

I walked across the road and saw some fallen tree branches. Took the longest one and was able to retrieve my car keys.

or should I say, “Car Sold Separately”…

This must be the funniest and silliest bunny related incident ever happen to me so far. Never a dull moment…